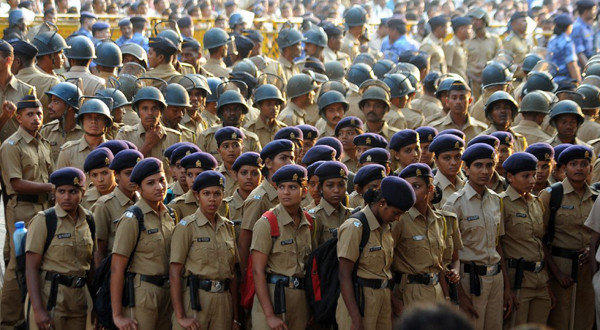 Indian policemen and women stand guard outside Shiv Sena chief Bal Thackeray’s residence following his death today after being critically ill from last few days. Thousands of anxious supporters gathered outside Thackeray’s house, and more than 1500 policemen were deployed in the area to maintain the peace. (EPA / November 17, 2012)

NEW DELHI — Mumbai was on high alert after Balasaheb Thackeray, a controversial and often divisive politician, died Saturday at 86 of a heart attack after several days in intensive care.

Some 48,000 police were put on high alert and railway security tightened on fears of violence, amid reports that taxi and rickshaw drivers were refusing to travel near Shiv Sena strongholds, inconveniencing travelers trying to get to the Mumbai airport. As word of his deteriorating condition spread in recent days linked to problems with his lungs and pancreas, theaters closed, film crews canceled shoots and musicians postponed concerts.

“Citizens should only step out of houses only if there is an emergency,” police warned. “An appeal is made to people to maintain calm and peace.”

Among Thackeray’s more controversial beliefs included his admiration for Adolph Hitler’s leadership skills and opposition to Valentine’s Day, which he viewed as a celebration of wantonness and anti-Indian values.

The conservative Hindu nationalist started his career as a cartoonist before founding in 1966 the Shiv Sena political party focused on Maharashtra, the state in which Mumbai is located.

In practice, his “Maharashtra First” agenda often translated into extreme pro-Hindu, anti-migrant policies that saw Shiv Sena over the years mount numerous campaigns against Muslims and those flocking to Mumbai from other parts of India in search of jobs and a better life.

Shiv Sena’s repeated threats to shut down Bollywood productions if they didn’t hire more locals were often seen by his many critics as little more than a shakedown.

Analysts said his attacks on “outsiders” and minorities had a certain resonance among urban middle-class Mumbai voters even as he imprinted a negative legacy on one of the world’s great cities. “He was a bundle of extreme, even brazen contradictions,” said Dileep Padgaonkar, a consulting editor with the Times of India newspaper. “He destroyed the cosmopolitan ethos of Mumbai.”

While more open-minded residents of Mumbai frequently bridled at Thackeray’s extreme positions, most shied away from confronting him given his political clout and ability to marshal party mobs on short notice for rabble-rousing missions. The Washington Post once described him as “the man who rules Bombay the way Al Capone ruled Chicago — through fear and intimidation.”

As word of his death spread Saturday, tributes poured in from politicians, film stars and celebrities, even as analysts on every TV network parsed his often-divisive impact on recent Indian history.

Prime Minister Manmohan Singh canceled his dinner Saturday, crediting Thackeray in a Twitter message for building Shiv Sena “into a formidable force in the State politics with his strong leadership.” And members of the main opposition Bharatiya Janata Party aligned with Shiv Sena called him a “son of the soil,” “uncompromising in patriotism” and the “king of commitments.”

Shekhar Gupta, editor in chief of the Indian Express newspaper, sees him as a complex, fascinating character, one of a couple dozen regional figures who provide a certain stability to Indian politics by drawing off voter ire and frustration in the absence of strong national leadership.

At one point Gupta recalls calling Thackeray a “mafioso” several years ago and being surprised when Thackeray invited him to his house for dinner. “If I was truly a mafioso, I wouldn’t be meeting you like this,” Thackeray told him. And as the conversation turned to wine, Thackeray joked that he preferred white wine, even though red was better for his heart, which fit, since many people accused him of being heartless.

“He was one of the great originals of Indian politics,” said Gupta. “He helped define the Bombay we see today, for better or worse,” referring to the city by its former name.

Following Mumbai Hindu-Muslim riots in late 1993 that saw an estimated 900 people killed — sparked in part by Hindu extremists’ demolition of a mosque hundreds of miles away in Ayodhya — Thackeray called openly for attacks on Muslims in an editorial. He was not against all Muslims, he added, only those who live in India and don’t follow the law. “I consider such people traitors,” he said. He was later quoted saying Muslims are “spreading like a cancer and should be operated on like a cancer.”

Thackeray was a magnet for controversy, particularly comments he made several years ago praising Hitler’s oratorical and leadership skills and calling for a benevolent dictator in India.

As a predictable firestorm raged, he clarified his position: “The killing of Jews was wrong,” he said in early 2007, according to local media reports. “But the good part about Hitler was that he was an artist. He was a daredevil. He had good qualities and bad. I may also have good qualities and bad ones.”

Thackeray opposed India-Pakistan cricket matches and other efforts at reconciliation between the two wary nuclear neighbors, writing in 2008 that Islamic terrorism was growing and Hindu terrorism was the only way to counter it. “We need suicide bomb squads to protect India and Hindus,” he added.

To near universal condemnation, he attacked tennis star Sania Mirza in 2010 for marrying a Pakistani cricket star, arguing that she should choose someone from her own country if she wanted to play for the national team. Her fame was less about her on-court abilities than her “tight clothes, fashion and love affairs,” he added. “Had her heart been Indian, it wouldn’t have married a Pakistani.”

It remains to be seen what form Shiv Sena and Thackeray’s ideas take after his death, analysts said, particularly given the tussle underway between his son and his nephew for control of the voting bloc he built. “That will be interesting to watch,” said Sidharth Bhatia, a senior journalist based in Mumbai. “Parties identified with one person always have this problem.”

POSTED IN » Other Bubbles

About the author: 12kilobyte View all posts by 12kilobyte

Will Musharraf coming back or some more Drama

Letter to Editor on insanitary Condition

Are you a competent student?, Claim your laptop

A letter to Editor on Smoking Evils

(palimpsests). In the XIII-XV centuries in...

Gd bt a lot of mistakes And there should be there paragraphs...